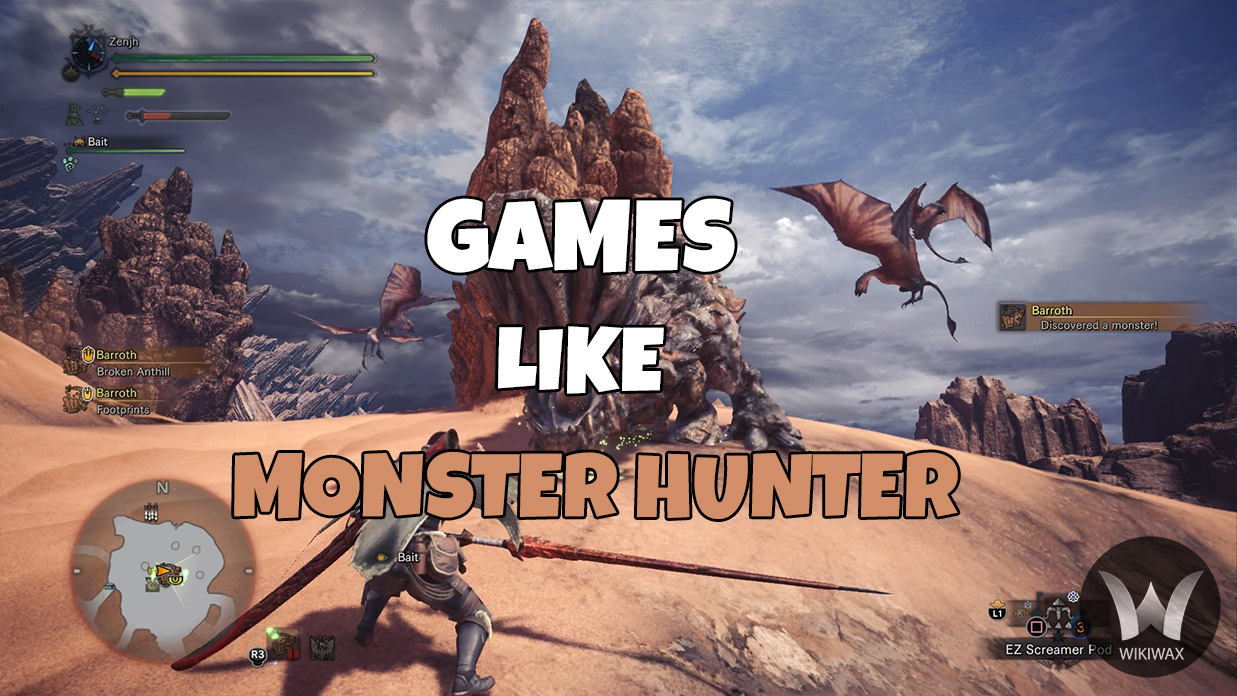 Whether you have only recently started playing Monster Hunter or have been an avid player since its beginning days, this game can surely immerse you in the experience. However, unfortunately, it is not a very long game, and you might soon find yourself done with the game. Well, finishing the game does not necessarily mean that you have satiated your want for the action-RPG genre. If that is the case, you are in luck.

There are a number of other similar games that can be a lot of fun to play. Since the first rendition of Monster Hunter came to the market in 2004, it has been quite a craze amongst gamers. With the memorable and epic boss fights and very well-crafted RPG elements, you might imagine that there are not many games like monster hunter. However, you might be quite surprised to know the several options you have. Here are eight monster hunter like games that you should try after the monster hunter.

This game first came into existence in 2015, mainly in Japan. You can play it on PlayStation consoles and also your PC. In this game, your character is a new type of God Eater who is tasked with fighting against other monsters like Aragami. It is perhaps the best free games like monster hunter, with some imposing creatures and epic game battles.

Right out of the Soulsborne series, FromSoftware has come up with the latest rendition of this action-RPG genre, and dark souls are surely one game similar to monster hunter you should not miss out on. This is the second game in the series and was not published with a lot of promotion or hype, but the sheer quality of the game and its critical acclaim in the gaming community made it a well-renowned game in the industry.

However, you should know that the game is quite difficult and is not a breeze for first-time players. But once you get a grip of the core mechanics, this game is filled with some memorable adventures and boss fight the modern gaming world has seen.

Another game that has had quite a revelation in the gaming industry is Toukiden: Kiwami. Known to be a better iteration of Toukiden: The Age of Demons, this is one of the free games like monster hunter that takes the whole game to a new level with new story content, more demons, and a total of two new characters, not to mention the other several improvements and changes.

Very much like the other games like monster hunter, this game too will ask you to embark on quests and defeat huge creatures. The good this is that you can approach each quest in a number of different ways in this game, making the game even more intricate and fun.

This is one of the games similar to monster hunter that will surely remind you of the combat mode in Monster Hunter. This game offers a much more combat-centric and action-packed experience.

While the original game came out in 1988, the second part is a more modern entry and is considered to be the best one yet by the gaming community. It has a great sense of flow and rhythm and some excellent combat mechanics that are sure to keep you hooked to the game.

Undoubtedly one of the more popular titles on this list, you might have already played God of War if you like games similar to monster hunter. The series was first launched in 2005 and had only been getting better with each rendition.

In addition to that great storyline, this game also features some ecstatic graphics. The later parts of the game switched from Greek to Norse mythology and added more characters like Atreus, Kratos, and the main character’s son.

When talking about monster hunter like games, you cannot miss out on Dragon’s Dogma from the list. The game engrosses the player in its story and highly equipped gameplay and graphics. Since its first launch, it has improved on many aspects of the game, including adding new weaponry, extra dungeons, and Japanese voice acting.

There are a lot of similarities that make Dragon’s Dogma one such monster hunter similar games, especially the party system.

While there are a number of single-player action-RPG games you can find on the PlayStation 4, Horizon Zero Dawn deserves a special mention. Launched in 2017, this game is now made variable on PC and offers an engaging storyline, making it an honorable mention in the list of monster hunter like games.

The developer, Guerrilla Games, receives a number of nominations and awards for this game as well, making this the perfect play for you.

The legend of Zelda:  Breath of the Wild

Released in the same year as Horizon Zero Dawn, this is another monster hunter similar game that you should definitely try. It is surely considered to be the best iteration in the Legend of Zelda series and deserves all the praises it gets.

This game does not limit its players in any way. It allows you to explore the world in any way possible. The sheer freedom offered in this open-world game is what makes this a masterpiece in its segment.

These are some of the monster hunter similar games you can find on the market now. Try any of these games and let us know in the comments.