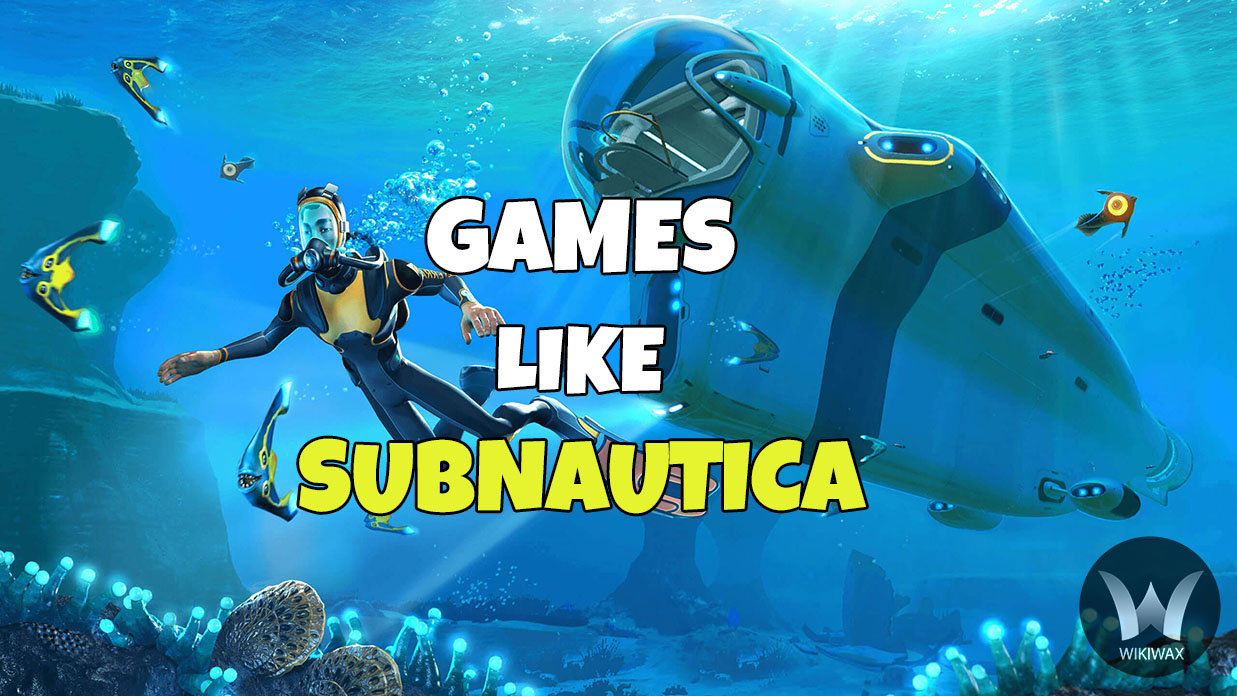 Are you looking for more games like subnautica? Well, you’re lucky as we have the 8 best games similar to subnautica.

But although these games are similar to subnautica, there are more things to do along with new adventurous experiences to enjoy. So, while you’ll have the similarity to subnautica, you better be ready for more challenges.

Now because there are several surviving games, it was pretty challenging to find the 8 best from those. That’s why this list is made after careful consideration and reviewing all those similar games.

When it comes to survival games like subnautica, there is nothing better than being introduced to a known environment in an unknown manner. And that’s precisely what Grounded lets you experience.

Your character would be shrunk to the size of an ant and forced to survive the dangers that come along with that territory. Everything from the tall grass and big ants to giant rats and spiders is going to be a challenge for your survival. As you can imagine, although it’s a game similar to subnautica, the gameplay is quite different from it.

The creators are going to be back with new features so you can keep coming back to the game for more adventure.

This game will leave you in the middle of nowhere, just like subnautica. You would have to find food sources along with other resources to survive the harsh environment of Out of Reach. According to many, this is among the best subnautica like games, but it also has its own USP.

This PC game is a fit if you want to face challenges and the features to do more. Like creating your shelter, fighting pirates, amongst other offensive obstructions, would be thrown at your way. You would have to do all of that along with fighting the cruel weather elements. In short, a perfect recipe for a thrilling gameplay experience.

You must give SOMA a try to get the best subnautica similar games experience. The unique aspect of this game is you’ll be playing as an AI character named Simon. Simon finds himself trapped in a research facility deep within the sea.

The circumstances are mysterious, and you have to uncover the truth about the facility. One by one, the truth will prevail about the unlawful experiments and missing employees. And you’ll have to do all of that by surviving the mechanized creatures.

Despite being known as one of the best games like subnautica, the Long Dark is not what you would expect. In The Long Dark, you’ll play a pilot named Will Mackenzie, who has crashed in the middle of nowhere. Your goal would be to save yourself from challenging situations that can kill you, such as hunger, wild animals, cold, exhaustion, etc.

They are essentially 4 different levels here, but you can also create a custom one.

There are actually four episodes, and the fifth one is in the works. The main focal point of these episodes is to search for your passenger Dr. Astrid Greenwood. You will play both the doctor and the pilot, which will depend on the episode. And that’s what makes this game similar to subnautica without having its own perks.

Having the same music composer and artwork director as the game Journey, Abzu is not your average survival game. But it’s arguably one of the best games like subnautica.

This game has already created a massive fan base for itself and is getting popular among several indie developers and small companies. You have to complete missions to unlock the further story while you keep diving deeper and deeper into the ocean. You will achieve stars and points and also ride some fish. Now that’s fun.

Although it’s in the list of subnautica similar games, Firewatch is a completely contrasting game from it. The environmental storytelling is unique, and although the exploration is minimal, you would be invested in opening all the drawers and reading the notes you’ll find along the way.

You’ll feel like you’re in a different world; at the same time, you’d have a heavy sense of the surrounding atmosphere of the game. You will also be lost entirely in the realm due to its walking simulation genre. Overall, this game gives the players a beautiful and polished simulation experience.

Unlike the other games like subnautica, The Forest gives you the feel of being in a classic horror movie. You would be the lone survivor here and again, like in The Long Dark, you are trapped in the forest after a plane crash. You would have to find resources for survival and do tasks like chopping wood, finding food, and, most importantly, crafting gears to escape the dangers.

You would feel a constant fear due to the mutants in the forest, meaning you’ll always be looking over your shoulder. It’s one of the best games like subnautica because it completely simulates your sense of dread to keep you glued to your controllers.

In Subnautica: Below Zero, you’ll be enjoying a chiller atmosphere in the Arctic region, again on an alien planet. Although the name might suggest it’s a different part of subnautica, it’s a standalone game. It offers a different experience just like the other games similar to subnautica. With its regular updates, biomes, creatures, and tools, expect the game to improve as the story progresses.

We have listed all the games that are similar in gameplay to the Subnautica below in no particular order.

There you have it, that’s the list of 8 free games like subnautica. These games are not only enjoyable but have their own unique story to tell. And if that’s what you prefer, then this list is the best one you can find. But obviously, there are more Subnautica like games; you can contact your own search to find what you prefer more.