8 Best Fixes for WiFi connected but no Internet Issue 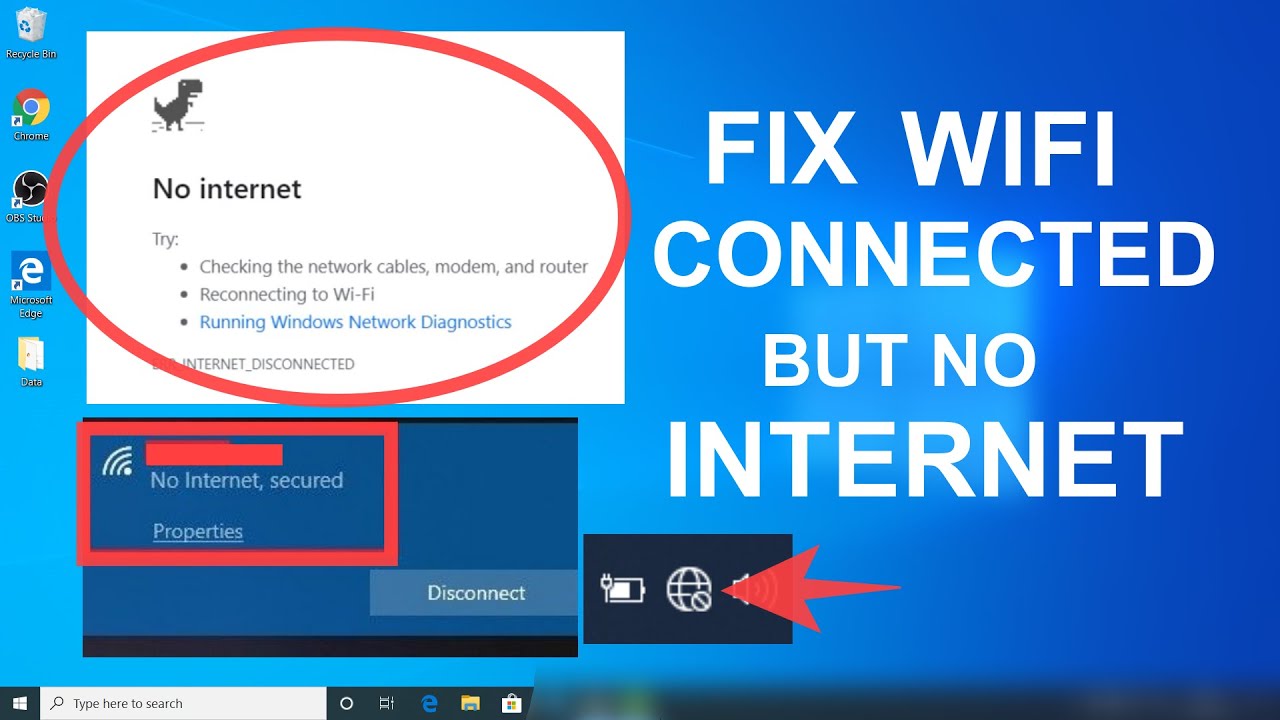 WiFi connected but no Internet: You must have faced an issue at least once in your life where the device connected with the Wifi network does not provide you with access to the internet. Although the Wifi is there, there is no internet connection. Now there can be multiple reasons due to which it can happen and finding the one specific reason for the same could be time-consuming.

There are a lot of different error codes which might be displayed or your device would simply not connect to the internet in any way. In order to resolve the Wifi connected no internet issues, it is important that you identify the source of the problem and for doing so you will have to understand whether the issue is with the hardware or the software.

Identifying the wifi connected but no internet issue source

When it comes to the no internet connection error, the first thing that you would need to check is whether the issue is with your device or with the Wifi Settings and router. To check for the same simply try to connect the Wifi network with a different device.

Doing this will not only rule out many different reasons for the issue but you will be able to focus directly on the source of the problem. In both cases, if the issue is physical, like the wires are not attached properly or the Wifi adapter is disconnected or something else, the best option would be to restart the device, which usually solves the issue almost immediately. In case the issue is with the Wifi Router, simply follow the below-mentioned steps.

In case the issue of internet connection problems is with the device or system, then you can restart the machine and try connecting to the Wifi network again. Restarting the device will not only clear the cache memory and will refresh the setting, but will also resolve most of the common issues with the machine and router.

Different ways to resolve the WiFi connected no internet issue

Even though you are able to identify the major source of the “internet may not be available” issues, there are still a number of reasons due to which the issue is occurring. There are a few common things that one can do through which the issues can be resolved most of the time. These might require the user to do some troubleshooting and are fairly easy to follow.

This is the first step that the users should do in case they are facing an internet connectivity issue. One can simply check the network settings on the PC and troubleshoot the problem from there. Simply right-click on the Network icon which is placed on the Task tray on the bottom right of the screen. From there select the Troubleshoot option.

The best part about this is that the Windows operating system will automatically check the network settings for any kind of issue. When detected, it will provide you with the options to resolve it automatically. Once completed, the issue will automatically resolve and you will be able to access the internet on the machine. This is one of the most commonly used resolutions for wifi connected but no internet issue

This might not be a common issue with all, but it is something that can cause the no internet connectivity issue on the system. Simply check the Windows and the manufacturer’s update list for any kind of new drivers for your wireless devices. In case there are new updates, download and install them on your system. Once done, simply restart your system once and try to connect with the Wifi network for internet connectivity.

In case the device, PC, or laptop you have connects to a different Wifi Network and works fine, but does not work on a specific Wifi network, then the issue seems to be with the DNS settings of the network. In this case, you would simply need to flush out the DNS which will help to remove the DNS cache of all the addresses from your device.

It is like refreshing the DNS cache of your device. Once done, you will be able to connect to the internet on the device for the particular network. To do so, one can simply press and hold Windows key+R and type ipconfig /flushdns. Press enter key and after it is over, try to access the internet again.

Apart from this, you can also set a fixed DNS which will tell your device to use a fixed DNS server every time. This will resolve most of your internet connection problems and especially when wifi has no internet access. To do so, right-click on the Network Connection under Network settings and select Change Adapter. Select the option of Wifi Adapter and select Properties. Select the Internet Protocol version 4 (TCP/IPv4) option and click on properties to select the “Use the following DNS-Server” option. There you can use the most common and reliable DNS servers 8.8.8.8 and 8.8.4.4

With the modern Wifi connection, you might have observed that they come with a dual-band Wifi network based on 2.4Ghz and 5Ghz, which latter being fastest. In case you are connected to one of the bands, try changing it and select the other band settings.

For example, if you are connected to the 5Ghz connection on the Wifi network, try selecting the 2.4Ghz and check if the internet connection still works on any device. You can also turn off the 5Ghz settings if you do not have any on your Wifi network from “Change Adapter Options” under Network connections.

Check with your ISP

If your devices are still connected but no internet, then it would be better to call the ISP and check if there is an issue at their end. Also, ask them to troubleshoot the issue for your interconnection from their end if possible, or if they can detect and resolve it. If the issue is from the end of the ISP, they will automatically resolve it for you or will send someone to your place to resolve it.

Sometimes, there is also an issue with the wiring outside your premises which can be resolved by a visit from the technician from the company. So make sure to ask them to make a routine check to see if a wire outside is cut or disconnected.

Returning the settings to default will provide you with the best possible network settings once again. To do so, simply go to Network and Internet settings and click on the Status option. There you will find the option for “Network Reset”. Once done, simply restart your computer and try connecting to the internet once again.

Another issue that might occur very commonly on Wifi networks is the allotment of the same IP address to more than one device. In such cases, both the devices are unable to connect to the internet although they are connected to the Wifi. Although these internet connection problems are rare, it can be one of the issues due to which the issue is being faced.

To resolve the issue, one simply has to open the command prompt and type the command ipconfig/release. This will help to assign a new IP address to the machine, after which you can try to connect to the internet again.

You can try these troubleshooting methods which will only take a few minutes and one of them might resolve the issue you have been facing. In case you need any help, you can ask a tech-savvy or a professional from the ISP company to help you with the same.