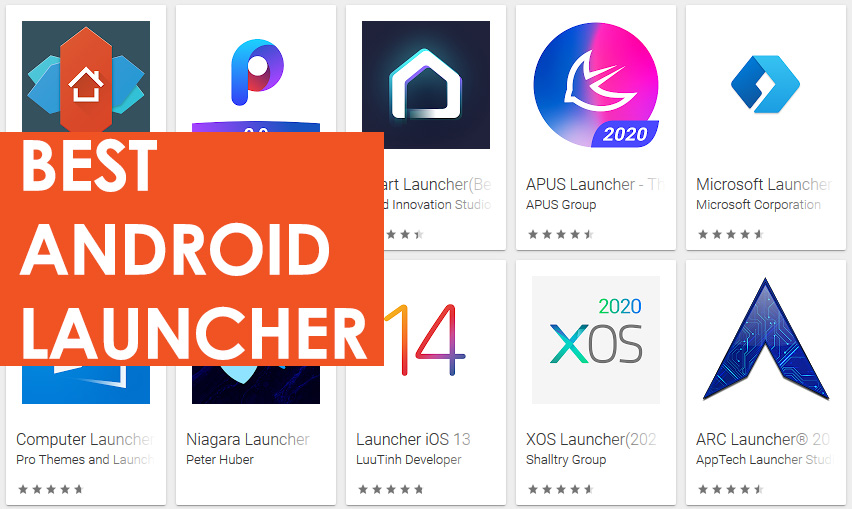 Best Android Launcher: The best part of using an Android phone is the amount of customization a user gets to do through the best android launcher and other applications. Every user has a specific way of using the smartphone and their way to arrange applications. As per the user’s preference, they can change the wallpaper, icon alignment, and many different things on their Android smartphone, which makes it look unique.

Due to the same reason, Android smartphones have many different apps and firmware that can change the entire UI of your smartphone. Due to the limitless customization Android offers, it has dominated the smartphones’ market with the Android operating system. Personalization options are limitless both on the default launcher and UI and even from a third-party application. Right from the time when Android smartphones were launched, one of the most popular apps or ways to customize your phone was through a launcher.

It used to replace the Android operating system’s default launcher, which provided almost endless choices for icons, transitions, wallpapers, icon arrangement, and UI elements. It used to change the look and feel of the smartphone to make it look entirely new. Many users still use launchers, and over the years, the Google Play store has listed some of the best launchers for Android. Launchers can change your Android smartphone in a way that is not possible with default Android launchers.

One can even give their Android phone the complete look and feel of the iPhone, with the same icons, lock screen, and other features from iOS. However, not every launcher may act as efficiently as it does on one phone. Therefore, we bring you the list of best launchers for android you can find on the Playstore. You can try them and find the best possible one for your smartphone.

Best Android Launchers: Below is the List of Best Theme Launchers for Android

It is the benchmark in the category of launchers for Android. It is one of the first and also the most popular Android launcher there is. If you are looking for a launcher with the trust of the users and is very reliable, there is nothing better than the Nova Launcher. Since it has been in existence for the longest time, it brings you the highest number of customization elements.

If you are looking for a launcher to customize the entire operating system as per your preference and work style, it is certainly one of the most efficient. The app is very easy to use, efficient, and lightweight at the same time. It provides the user with multiple kinds of hand gestures, colder, icon and drawer customization, and much more.

It also comes with features like sub-grid positioning and edge-to-edge widget support, which only Nova launcher provides to its consumers. It provides the user with an option to customize the home screen with quick access to Microsoft account and smart news feed. It also has a two-level dock and provides other important mobile information, such as usage.

It is one of the most reliable launchers in the market as it was launched and created by Google’s house. The launcher has been specifically made for the non-pixel devices, who do not like to use the in-built Android launcher and prefer original Android experience. The launcher also provides the user to customize the search bar, right from the home screen.

The launcher is not resource hungry and can easily be used on phones with low specs. If you are looking for a pure vanilla Android experience, this can be a great launcher.

It is a great launcher for people trying to use it on an Android smartphone, which does not have premium specs and requires apps that are not resource hungry. The launcher is very lightweight and will not consume many resources to slow down the phone. It brings around many gestures and tweaks for the user and helps to customize the entire phone as per the user’s usage and personality.

The best part about it is that it also allows a backup on Google Drive with all the app settings. In case you are looking for a free launcher with high-speed experience, this launcher would be perfect for you.

If you are looking for the fastest android launchers, which are straightforward, very easy to use, and stable, then this is the one to go for. The app has been built using the authentic android interface. The app will allow the user to change the color of the interface according to the wallpaper dynamics. It also provides shortcuts, icons, app drawers, transition on the home page, and many other features.

Most of the launchers available in the market make the user set all the things manually, which can be good for customization but might take a lot of time. However, this launcher makes things easier for the user by providing them with a predefined home screen and accompanying features.

Due to this, it was considered the best launcher apps for Android in its niche. Built-in options can help the user edit icons, home screens, and wallpapers, and create several transition effects. The launcher is very light and can be used on smartphones with low-end configuration as well.

Last in our list is the Rootless launcher. It is one of the launcher apps for Android, based on the open-source software, which provides all Google Pixel launcher features available on Android devices. It is meant for those who want to experience the Android Pie user interface on their android phone.

It will provide you with almost all features available on the Pixel devices and will meet the user’s expectations.

Sometimes users are not looking for launchers with many options, which can make things confusing for a new user. For that kind of user, this launcher is perfect. It is a simple launcher that has a small set of features and options to change. Since it has a low set of elements to customize, it is much faster and efficient than other launchers.

The launcher can also be used to provide an iPhone UI interface for your phone. Although it is free, it does come with many bloatware and ads, which does not make it suitable for all.

The launcher has many apps with the name Quick, like Quick page, Quicktime, Quickbar, Quickdraw. It emphasizes that the app focuses on the speed of the launcher and how quick its usage is.

Released in 2019, the launcher is one of the top Android launchers, when it comes to being lightweight and fast. The launcher comes with an app drawer that can categorize the apps based on the category. It can also help you change the lock screen, wallpaper, widgets, and many different elements on the home screen.

If you have never tried a launcher before and want to try something faster and lighter, you can try this launcher to get comfortable with its feel.

These are some of the Best Launchers for Android in the market, which can provide your old android smartphone a fresh new look. The launchers are reliable and will not change or update any of your original firmware files. It can be easily installed and removed with the same ease as well.

When it comes to customizing Android, there is no better alternative for the user than the launchers. I would suggest you try them once with a few customizations and the way you want your phone to look. Keep it if you like, or you can always go back to the default version. So, I hope you found this article on best android launcher as good. We would request you to kindly share this article with your friends.